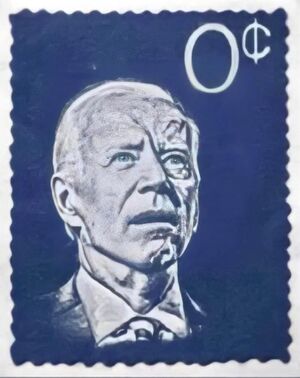 I was going to limit today’s post to the stamp. Then I read Bjorn Lomborg’s article and felt it worth sharing. Please give it read.

How the Climate Elite Spread Misery 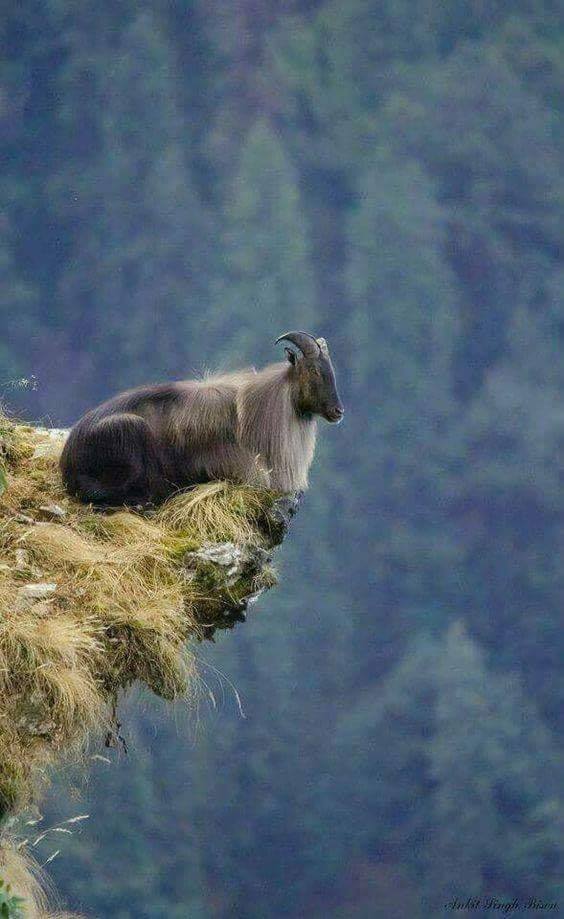 No surprise that I applaud the five jurists that overturned Roe and Casey. Roe had no basis in our Constitution. It was pure legislating from the bench.  Roe was the real “exercise of raw judicial power,” as Justice Byron White put it in dissent in 1973.

Congress had a half-century to pass a law governing abortion. They ducked, as over half the voters in many states do not support abortion.

Trump did one good thing – appointing three conservatives to the high court. Not to mention the dozens to Districts courts where future supremes are most often drawn.

Women’s healthcare is euphemism for Plan B birth control – where neither the man or woman use birth control. I wonder if condom sales will increase now.

I see women carrying signs that read Keep Your Hands Off My Body. They could take that to heart and not allow so many hands on their bodies.

The majority’s decision in Roe was grounded in its view that in 1868, when the 14th Amendment was adopted, abortion was widely restricted throughout the U.S. Therefore, Justice Alito wrote, the right to end an unwanted pregnancy couldn’t be derived from the amendment’s provisions protecting individual liberty and equality from infringement by state governments.

“A right to abortion is not deeply rooted in the Nation’s history and traditions. On the contrary, an unbroken tradition of prohibiting abortion on pain of criminal punishment persisted from the earliest days of the common law until 1973,” when Roe was decided, Justice Alito wrote.

Warning to lib tards, these articles express facts. You are not equipped with critical thinking so reading them would be a complete waste of your time. Go play a game.

Then-candidate Joe Biden said in 2019 that he would “end” the fossil fuel industry in the United States.

Biden said something similar in 2020 on the Democrat primary debate stage. Biden promised to wage war on the American oil industry by terminating subsidies and drilling feasibility.

“No more subsidies for the fossil fuel industry,” Biden said. “No more drilling, including offshore. No ability for the oil industry to continue to drill, period,” Biden said of his energy policies if he won the presidency. “It ends.”

Biden has made good on his promise. On day one of his presidency, Biden canceled the Keystone pipeline. Biden has also driven up private and public financing costs of oil drilling and halted drilling on public lands.

Gas prices reached a seven day record average of $4.81 on Saturday, doubling the $2.39 per gallon price on Biden’s inauguration day.

Biden has assembled nothing but cockroaches like himself for every appointed position.

Here is a small example of bureaucratic overreach.

The Federal Aviation Administration on Monday said it will require Elon Musk’s SpaceX to make dozens of environmental adjustments in order to conduct further Starship flight tests and begin operational launches from its facility in Boca Chica, Texas.

Among the requirements, SpaceX will coordinate with a “qualified biologist” on lighting inspections to minimize the impact on sea turtles, operate an employee shuttle between the city of Brownsville and the facility, and perform quarterly cleanups of the local Boca Chica Beach.

The company will also contribute to local education and preservation efforts — including preparing a historical context report of the events of the Mexican War and the Civil War that took place in the area as well as replacing missing ornaments on a local historical marker. The company will also make annual contributions of $5,000 each to organizations that protect ocelots and endangered birds of prey, as well as a state recreational fishing program.

That’s right the FAA is requiring SpaceX to do history.

The actual problem – We have fathers who aren’t home. We have emasculated our men. The kids spend their waking hours on phones and miss real-world socialization. Covid made it worse.

Every one of the shooters has had family problems. 37 times police were called to The Parkland shooters’ home.

It’s not guns, it’s mental health. Everyone one of the shooters has been mentally disturbed.

I read A Molecule Away from Madness. It details how a flawed gene or a rogue protein can result in many maladies, some of which result in aberrant or irrational behavior.

Some, not all, behavior can be “normalized” with drugs, by providing a missing protein or reducing the over production of a protein.

The problem is identifying those affected and somehow, someway ensuring they get the medication. I have no idea how that can be done, but if we really want to end senseless killing, it must be done in addition to having stable two parent homes. Ending the emasculation of our boys and putting the phones in the dumper.

By Jason L. Riley Deterrence is the more realistic option. Misbehaving students can be suspended and expelled if necessary. Mental-health services can be improved. Armed security guards can be employed. No one thinks turning schools into fortresses is ideal, but turning schools into gun- free zones can make them a magnet for mass shooters. When you’re worried about someone shooting back, sometimes you think twice about taking the first shot.

An article from someone I am sure knows more about mental health than I do. [Copy and paste]

I have no problem with background checks. All states and federal agencies are required by statute to report criminal records or anything that make a person ineligible to purchase a firearm. Guess what –  compliance is below 50%.

Even with full compliance, I see a problem. Who decides what to report? I suspect a bureaucracy would be made up of the same sort of “woke” folks that have infested school boards.

I recall when the No Fly list was first implemented. Senators Ted Kennedy and John Glenn were on the list and it took sometime for them to get off it. That’s what happens with bureaucracies.

Horrible, but not as much as we might think

Mass shooting casualties are less than 1% of all gun deaths, and there have been 13 mass school shootings since 1966. Cold comfort to those mourning the shooting victims in Uvalde, but they ought to inform any public policy response under consideration.

Tired of politicians? I sure as hell am. Doing the same thing and expecting different results is said to be the definition of insanity. My idea is to have non-politicians serve – people with zero political experience. It could be you or your next-door neighbor.

Here are a few well known names that come to mind.

Anyone on the WSJ Editorial Staff

What do you think?

It is difficult to identify any corner of American life that has not become unhinged from what once were considered normal restraints on behavior, personal or political.

There is no other issue with more passionate than abortion.

So 96% of abortions are done to correct a “mistake” such as not using birth control. Or put another way an escape from engaging in reckless behavior.

I suppose some of these women may be like the law student who testified before a Senate committee that she did not have the time or the money to secure birth control. I presume that abstinence, oral, digital, mechanical etc. are not options.

And men are just irresponsible as women.

Here are the reasons for aborting a “mistake”. 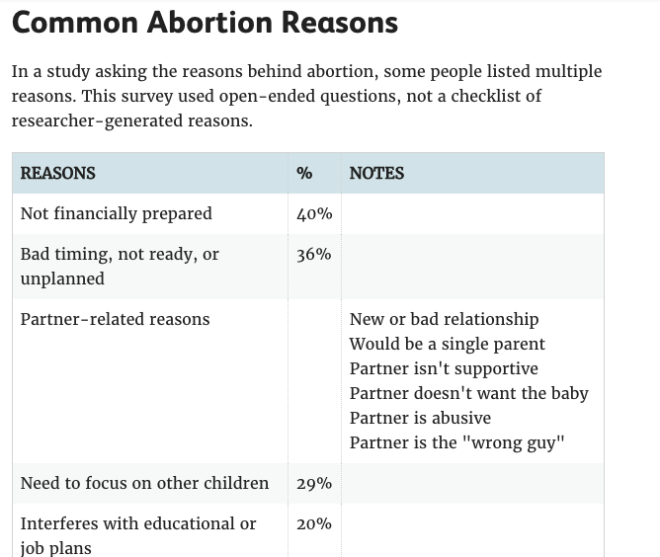 In 1992 Bill Clinton said abortions should be safe, legal, and rare. 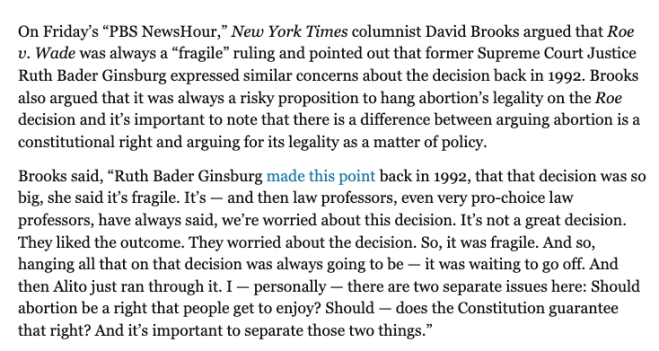 I can not imagine anyone having sex with these women. 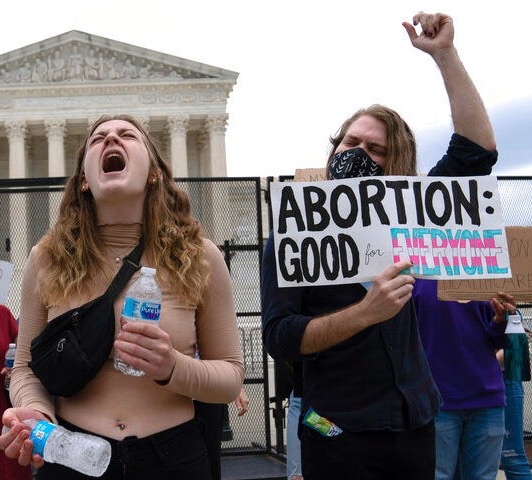 I am not surprised that we now have Disinformation Board. The only surprise to me was that they were completely open about it.

Nina Jankowicz is an American author and political commentator specializing in disinformation. She was selected in April 2022 to head the newly formed Disinformation Governance Board of the United States Department of Homeland Security

In a twist too implausible for fiction, the abbreviation is DGB, one letter off from KGB.

Jean-Pierre’s appointment was hailed as “historic,” since she will be the first black woman and “out” LGBTQ person to serve in the role.

Jean-Pierre credentials include working for MoveOn.org and a history of anti-Israel radicalism.

On The Leaked Supreme Court Decision

R v Wade may be the only supreme court decision the public is aware of. It has caused almost 50 years of turmoil. It will now go white hot.

Putting aside all feelings about the morality of abortion, I am wholly supportive of reversing R v Wade. That decision was conjured with no basis in the Constitution. [It is as repugnant as Plessy v Ferguson was] Repealing Roe will return abortion policy to the states and democratic debate.

Alito wrote: “The Constitution does not prohibit the citizens of each State from regulating or prohibiting abortion. We now return that authority to the people and their elected representatives.”

Will some abortion fanatic decide to commit an act of violence to stop a 5-4 ruling? It’s an awful thought, but we live in fanatical times. Violence seems to be the religion of the left,

The ones with their hair on fire claim an ban on abortion [reversal is not a ban] will be followed by a contraception ban. Then a ban on same-sex and even interracial marriage. Soon we will all be living in “The Handmaid’s Tale”. That’s the claim even though the decision explicitly says it will not.

My personal thought is women would not need casual abortions if they kept their knees together. Nothing scares the hell out of a leftist like the prospect of taking responsibility for their actions. Don’t start up with rape, there is a morning after pill. And there will be medically necessary abortions. It’s a state issue, that should be determined by the voters in the several states.

It tickles the shit out of me that the libtards have their panties in a wad fearing that Musk will allow free speech on Twitter.

Goes for the Ukraine people. Still fighting while being massacred and tortured.

What I think Fauxhonotos needs.

A must-read for those who think Elizabeth Warren is full of shit. If you believe anything she says move along, you will learn nothing here.

This is a link to article that appeared the Wall Street Journal on April 23.