We continue cleaning, painting and tossing out stuff. We found a trove of VHS spanking tapes a few weeks ago. I offered them here for the cost of mailing. No takers. Yesterday, I found a VHS spanking tape of us.

We were early adopters of video cams and this tape shows us in our young and fit bodies captured during several play sessions. Damn we looked good. Bacall is over my knee in one scene, while I am getting my bottom toasted in all the others. I had no idea we did so much OTK in the old days. What a surprise.

It’s fun to look at the smile on her face as she puts the wood to me. And her lingerie. Oh la la. Hot!

Oh my, the camera keeps running after the paddling is over. The two backed beast is caught on camera.

Too bad everyone dumped their VHS players and can not see this.

Simulation of our old spanking days

I never had white shoes, but she sure had the lingerie – garter belt and hose.

Since Pervertibles are popular posts of late, I thought I would ring in with a memory.

A few years back we were shopping at our first Target. It was 20 miles across the county from our home. We saw a spatula with an ergonomic handle. Since there were several counters between us and the main aisle, we had to try it out. So I popped Bacall a few times with it. It seemed to have the desired effect. I hung back on the rack and we continued shopping. I know she was disappointed that we did not buy it, as she brought it up more than once.

Imagine her surprise when she found it in her Christmas stocking. 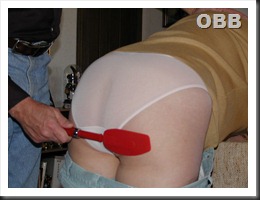 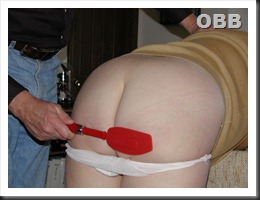 For those who prefer a bare bottom

One of the first lasses I spanked, Carol, wore tight white shorts. Her shorts had legs about one inch long. So there was plenty of  sweet tender thigh to admire. She had several pair of of these shorts or they were washed very frequently as they were a mainstay of her summer wardrobe on the river. She was petite, with small perky breasts and blonde hair or at least the tresses on her head were golden. I wanted her. She was likely virgin, I know I was. We were both 14.

There were six of us that spent the summers on the river who were all about the same age. We spent most of day on the water, swimming, skiing and goofing off. At night, we gathered on the pier that was 30 yards out in the water – far enough out that adults could not surprise us. The talk was racy, but other than a few stolen kisses nothing much happened.

This changed when Becky’s uncle moved his Century Resorter to her parents boat house and Becky got boat privileges. WooHoo! While we all had run-a-abouts, this was boat had class. None of us could take a boat out at night, but Becky could. And her uncle was generous with gasoline. She must have filled up the tank at least daily. Of course, gas was only about 35 cents at the inflated prices on the river. So a fill-up was about $15. More than we could pool in a day.

Looking pretty much as I remember the boat

So with some fine talking, promising and lying by all of us, we soon were drifting in the middle of the river at nights, instead being pier bound. We had it made. And we could get beer where we got gas, so we were able to keep our thirst quenched.

We had always dressed up a bit for our evening activities, even it was only sitting on the benches at the end of the pier. But, we now started wearing swim wear under our clothes, so we could swim in the cool water of the middle of river. This also led to increased contact with soft female skin in the moonlight far from the eyes of our parents.

Life was getting better.

One evening it was Becky’s birthday and someone else, not me, decided to give her birthday spanks. So Becky was given a few spanks by all of us, I think two other girls and the three of us knuckle-dragging guys. She did not fight at all, but gracefully bent over the engine compartment and accepted her spanks with equal grace. Now Becky was a looker, buxom and all that, but it was Carol that I had the hots for. And in our youthful exuberance it was soon determined that all the girls needed a spanking and soon Carol bent over the padded cover with her tight white shorts radiating the light of the moon and stars.

Not Carol, or anyone I know, but some fine white shorts

I did a sorry job of spanking her as I was more nervous than I had ever been in my life. There in front me, encased in white, was the object of two months of serious adolescent interest – her bottom willingly presented for my palm. And I could only do a half-hearted job.

I wish I could relate that I made up for that night with her, but it never happened. It was not the last spanking in that boat however. And burned into my wee mind that night was a life-long obsession with wooden speed boats and tight white shorts.

This memory was brought front and center by a remembrance of Dave Wolfe.

Long ago in a far distant universe, Bacall and I were with another spanking couple engaged in some casual spanking before dinner. We were all on the same bed. Bacall was OTK of the other man and his companion was over my lap.

I had on light gray dress slacks. That’s important. When the lass got off my lap the outline of her jade gate was perfectly imprinted on the leg of my slacks. Of course her friend saw it. And being the jealous type he was infuriated that she got turned on being spanked by a male switch. In his world male switches were as low on the pole as you could get. But, we did not know that at the time.

He started to take out his fury on Bacall’s bottom, but she put a stop to that right away. Bacall is not any more submissive than I am. He found his solace in two double Jack Daniels before dinner.

Maybe I should have saved the slacks like Monica saved her dress. But what museum? The Spanking Hall of Shame?

If there is a moral here, perhaps it’s to not wear light colored slacks to parties.

I must be really getting old, since in the last few weeks I am remembering things that have not crossed my wee brain in a very LONG time.

We were at some beachside beachwear establishment in the Florida panhandle. We discovered they had some kinky stuff in a back room. We were with a pure vanilla couple, but we sometimes play fast and loose. Bacall found a small flogger and decided to test it on her bare legs. That elicited a loud Owwww! Her gf asked why she had hit herself, Bacall said it seemed like the thing to do.

Another time in Coconut Grove, we found ourselves in the Pink Pussycat, an adult store. Bacall found a black leather pig slapper that she was almost positive that she just had to have. She asked the guy behind the counter if she could try it out. Fine with him. So she bent over the counter and I started whacking her with it. She purred.

So we bought the slapper and as we walked out, I gave Bacall a slap when we were right behind them.

Life is nothing but a dash and you should have fun during it.

Have a good weekend!