Once in awhile, I have to comment on the advice given on other blogs.

First, This seemingly innocuous graphic was posted and people took exception to the work Hit. OK, Hit was not the best word to use. I took it as advice to newbies. Rather than go off on the choice of Hit, I think the experienced players should have supported the idea that the bottom is in control. There are always newbies and wannabe’s that need to understand that.

Safe, sane, and consensual were the bywords in spanking two decades ago. It’s seldom mentioned now. With all the violence that goes on in the streets of the world and the many who ignore laws and common etiquette. Let’s promote being good to each other in the bedroom. 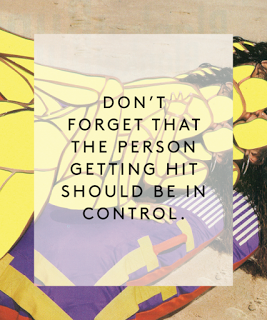 I commented: I will ring in and say that for at least two of us the bottom is always in control. That may make us odd man out, but we would not have it any other way.

The bottom may make it seem that the top is in control. Or the top may be delusional that they are in control. Unless we are talking about a sub that has so much guilt that no amount of pain will suffice paired with a sadistic top, then the bottom is always in control.

Many bottoms use various subterfuges to get a spanking. They know the buttons to push and it works well for them. They have the illusion that they have given up control and that is very necessary for them. BUT, they also know that their spanker will not take them into a danger zone. They may have a safe word. And for those reasons alone they have not given up control.

I have spanked a few women. I can not recall a single one that did not start with how she wanted to be spanked in great detail. I encouraged it. Sometimes it was easy for them to explain in a story. They gave me control to do this, this and this, but not a damn thing else. I say she was in control. Afterwards, I was always “graded”. I did that just right, but a bit more of so-in-so next time would be appreciated.

Red commented:
interesting to read.. a safe word in case of actual danger, but when being spanked the spankee is never in control, at least in my case, and any other people I have read.
bottoms up
Red


Well, Red you need to read some more. You have spent years cajoling your wife to spank you. That does not sound like she was ever in control. She is doing you a favor.

For your edification, I quote Zoë Ligon

… spanking and other forms of impact play can be intense and potentially dangerous, so it’s important that people don’t think you can just randomly hit your partner during sex — engaging in impact play involves adhering to a set of best practices that ensure that all acts are safe, pleasurable, and consensual. …
DO:
DON’T:

That is the way I have always seen safe, sane, and consensual play described.


Second, he wrote on his blog:

The advantage of a spanking is that it is a problem that is being solved. The spankee knows that they have done something that is necessitating the spanking. After the spanking, the problem is forgotten, but the sore bottom is a reminder to not do that specific thing again.

Really? It’s not working as he keeps getting spanked again and again for the same thing – such as him being snippy or short with her. They are happy with the arrangement. He likes to be spanked and prefers a real life reason and he likes sex after. Great, spanking and sex go together in my world. I get wanting to be spanked as punishment. But why the subterfuge of intentionally acting out to be spanked?

This works for them. That’s great. But I can not condone advocating the same for others. I don’t think intentionally annoying your spouse makes for a healthy relationship. I think that is especially true when a man cajoles a not dominate wife to spank him. Continual annoyance may bring divorce papers, rather than a hoped for spanking.

I don’t think that adult spanking modifies behavior one whit.

Last, I will close by saying that non-consensual spanking stories leave us cold. If I never see another story with headmasters, stable masters and strict uncles who spank their nieces, it will be fine with me.

OK, off my soap box.